You have the power! Well okay it's really the BMC but you helped. (If you don't get the reference then I feel sorry for your childhood)

Okay there seems to be a lot of confusion surrounding this topic. New and old members are constantly asking were to find either switched power (ignition) or constant power (battery hot) for one reason or another. Regardless the reason there is a correct and incorrect way of achieving this.

Most members do not feel comfortable splicing into physical wiring and truthfully I suggest avoiding it unless necessary (why add potential issues if it can be avoided). Scotchloks & T-taps are for scrubs (yes I'm talking to you!)

Fuse Taps are a good way to add additional components while leaving the factory wiring another. However there is a correct way to install these to prevent causing damage. If you're read this I'm going to assume that you have some method of reading voltage. It doesn't need to be an expensive DMM (digital multimeter) but something that shows you are working in the right direction.

So let's start with this example:
You want to install a dash camera because the general public is comprised of savages.

For this camera you need to have a constant source of 12 VDC power (battery hot) and a ignition source (a signal that indicates the vehicle is in use). Well unfortunately unless to are looking to run additional wires to the BJB (battery junction box) next to the battery a true ignition source isn't truly available at the BCM (body control module) but using a signal that is connected to the interior lighting circuit is the next best option.

The majority of Focus ST's in the USDM have an unused Fuse slot on the BCM that is connected to a constant battery hot so that will be you connecting point.

It is up to you to verify that the BCM Fuse slot has Fuse blade supports. Not all empty slots have them and if you attempt to press a fuse tap against the BCM's circuit board damage could occur

So let get things hooked up.
BCM (F61) = front and rear power points (hot whenever the vehicle is operating and off when exiting vehicle afte the engine is turned off)

BCM (F88) = Unused per ford. This is open to add additional components not exceeding 17 amps (85% of 20 amp maximum) *circuits exceeding 20 amps should be run directly to an open point on the HVJB (high voltage junction box) but that's a different post for a different time.


Do not add fuse to lower slot in the fuse tap for F88. It will add power to components not use and could cause issues. Better safe than sorry.

Attention!
It's important to understand how a fuse tap works. Installing them incorrectly can lead to damage or negatively effect other components on the circuit you’re tying into.


Correct orientation: The side the does not have the wire is to be placed on the source voltage (switched or constant). This allows the factory circuit to be left alone (Fuse 1) and allows for an additional component to be added on the circuit (Fuse 2)via the attached wire.

It is up to you to verify which side is source voltage and which is the load side (component) by removing the fuse and checking each side of the fuse holder. You have been warned for the last time.

If the fuse tap is incorrectly installed all the load is carried by (Fuse 1) as it becomes the source voltage for everything.

Wanna see what 9.5 amps on a 10 amp fuse looks like? Sure it worked for awhile but after a month this persons vehicle still smells like burning plastic. They were lucky as I've seen several vehicle fires in my career. One being fatal. Take the time to do it correctly!

So the above should get you what you need. All that's left is a good ground point which can be easily located at a factory location behind the panel on the passengers side footwell next to the BCM.

Hopefully this helps and if you have any questions I'm always here to help whenever I can.

Joined 11 mo ago
·
318 Posts
Talk about the creepiest of perfect timing in this post.

For the first time, I'm enjoying the joy of fuse taps. I've always cut into and soldered wires (a scary thought but it's what we all used to do, or so I think).

That said, I couldn't figure out these fuse taps. Something so simple and I couldn't understand why there were TWO slots on them. ... it's because the fuse you're using (if using it) goes there. Legit didn't know that and I've been doing car audio and electronics for way too long to admit.

Thanks, man. Now to ensure I'm not melting anything.

itssocoldinthe said:
Talk about the creepiest of perfect timing in this post.

For the first time, I'm enjoying the joy of fuse taps. I've always cut into and soldered wires (a scary thought but it's what we all used to do, or so I think).

That said, I couldn't figure out these fuse taps. Something so simple and I couldn't understand why there were TWO slots on them. ... it's because the fuse you're using (if using it) goes there. Legit didn't know that and I've been doing car audio and electronics for way too long to admit.

Thanks, man. Now to ensure I'm not melting anything.

If you don't mind my asking: How do you go about ensuring you're plugged in to the proper side?
Click to expand...

Remove the fuse your planing on using.
DMM set to volts. Black lead to chassis ground. Only one side of the fuse slot will have 12VDC. The other will (should) show you either nothing or ground as it is the load.

So just remember that the fuse tap plugs in with the wire away from the source voltage.

itssocoldinthe said:
Duh ... figured it out with the DMM.
Click to expand...

I just replied when you figured it out 😆

2017 Kona Blue ST1
Joined Dec 9, 2016
·
4,017 Posts
@itssocoldinthe I also use these when space is limited but will require another fuse holder to protect the addition component.

Joined Feb 1, 2018
·
1,886 Posts
Something similar to the above is necessary when attempting to utilize F61, as the typical Add-a-Fuse is too bulky to seat correctly. I tried a few different configurations, but the harness connector and/or the fuse panel frame makes this a tight spot. Because of this, I ended up using F85 for the switched power source.

SSgt- thank you SO much for all of your assistance with this and other novice questions.

Joined 11 mo ago
·
318 Posts
Oh snap. I've been trying to use the fuse box in the hatch but haven't had much luck. I have voltage back there but couldn't get it out if any of my fuse holders.

I figured it was due to the add a circuit not working ... now I have confirmation. Much appreciated, gentlemen.

SSgtjrobertson said:
@itssocoldinthe I also use these when space is limited but will require another fuse holder to protect the addition component.
View attachment 402722
Click to expand...

Does anyone know what this is called or where to buy them? 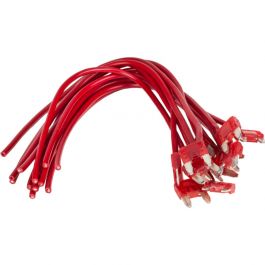 10 Amp Mini-ATC fuseReplace an existing fuse with a fuse that has a pre-wired leadMakes adding any electrical accessory to your vehicle very easyLowest profile fuse tap, our taps can fit within existing fuses boxes